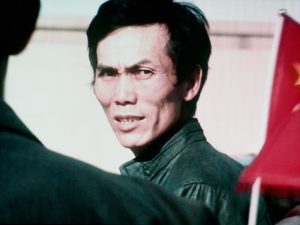 »The Tiananmen Square […] is one of the larges public squares worldwide and one of the most camera-monitored places. Officials and police try to keep track of which images are taken on this square. Every year June 4th they are very alert of people taking photographs on Tiananmen Square, and if you search for relating images on the web in China you find a very „pre-selected“ choice of images. No photographs of students, no images of protests let alone the „tank man“ can be found. People in China don’t talk about what happened – if they know it at all; not in public and I guess many even avoid talking or thinking about it at home. They don’t learn about it in schools or universities, they can’t find information about it accidentally. Unlike in Hongkong. „Give the Chinese students their history back“ is one headline of the Democracy Movement. Participants of the 1989 protests, Chinese dissidents and Hongkong activist are very aware of the aspects of images and knowledge. Some of them founded the „June 4th Museum“ in Hongkong placed in a small, hopefully permanent space for all the material they collected from the very beginning.«

Her practice begins with surveillance. The process, two-fold: her tourist-like filming of people in heavily watched and monitored public spaces and her use of the raw footage in a secondary process, where photographs are taken from the screen. The editing is where the work takes shape and sequence. The aesthetic is one of paused video stills – cathode ray tube portraits. read more»»